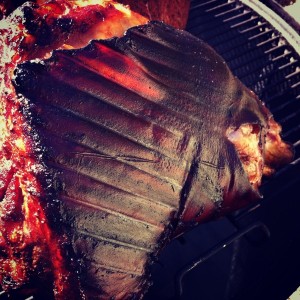 Pork Barbecue. What is it? No it’s not pork put into a crockpot with sauce and called barbecue. That would be faux que. Get it? Sometimes I’m so funny I make myself laugh!

Anyway back to the subject at hand. True pork barbecue is whole hog cooked with wood burned down to coals. What most people reading this call barbecue is really smoke cooking. Smokers are actually a fairly modern concept. 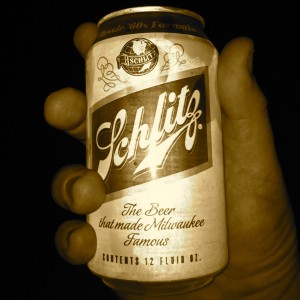 Have you seen many old photos of a guy with a Schlitz tending to a Weber Smokey Mountain? Here is one I found of a guy sitting next to his WSM late at night Smokin something from the 1960’s.

Okay I lie that is me. Hey it said 60’s formula. Close enough? I  probably just lost my homebrew license. Actually for what it is (Sittin around in my daisy dukes watching my son mow the lawn) type of beer it’s not bad. Okay I lost my train of thought…

Yes…yes…True barbecue. Well lets be honest most of us either don’t have the ability, skills, patience 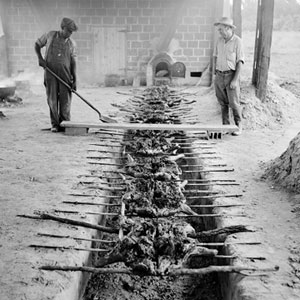 , or permission from our wives to do true pit barbecue in our front yard. It’s not something you can just read a book and learn it takes many years of actually doing it to master. That is why the “smokers” that we see today have came about. It’s a true artform and as with artists it just can’t be replicated unless your a true artist. It’s really unfortunate that this skill set is being lost.

Can you imagine opening a true pit barbecue joint in say California? The food police are already calling the SWAT team just for me saying it.

So with all this being said I wanted to try cooking semi faux que. I decided to try cooking a pork shoulder (picnic) direct over coals in my WSM (Weber Smokey Mountain). My goal was to get some of that crispy skin that you can only get from putting it over some high heat.

So first I made a simple rub: 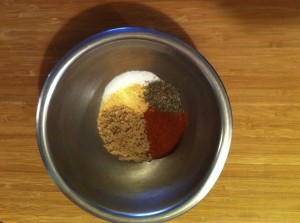 And rubbed all over the pork.

Ok so now I will probably lose my credibility for everything I just wrote above. I went on the INTERNET and saw a recipe that Chris Lilly supposedly uses to inject his pork shoulders. I have never injected any pork so thought I would give it a go. Sometimes I just like to try different things I guess. His recipe called for apple juice so I used what I had on hand: 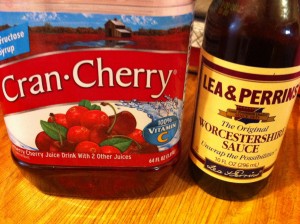 I injected that poor pig with this mixture. 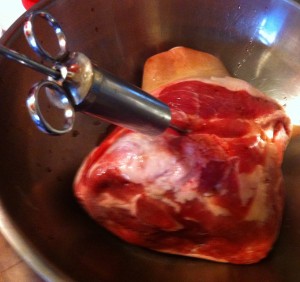 Fired up my charcoal and let it burn down to coals. 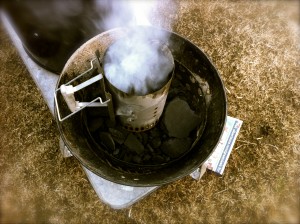 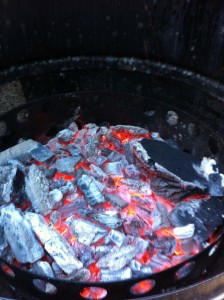 Put pork above coals…..and cook! Well it’s not that simple of course. A WSM without a water pan is like that girl from the Exorcist. All is fine and then she starts turning her head around and screaming pea soup at you. Yeah kind of like that. I had to watch it for the whole 12 hours I cooked it. I let the flames pick up to crisp the skin towards the end.

When done I chopped the crispy skin into the pork. All I can say was this was the BEST pork I have ever had. Not as smokey as you are used to but a different type of taste.

I sprinkled some Bobinga dip on it and that just made it. Bobinga raises his own hogs from start to finish. He has his own thoughts on what real barbecue is and I agree with him whole heartily even though I may be an evil suburbanite (But at least I know I am). Check out his thoughts on barbecue HERE. Here is his vinegar dip recipe I used:

Here are some finished photos: 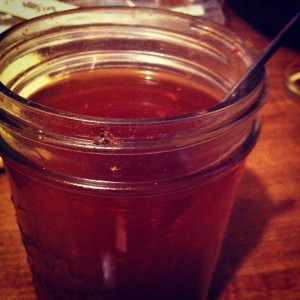 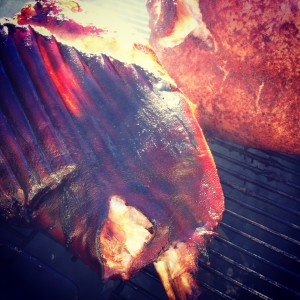 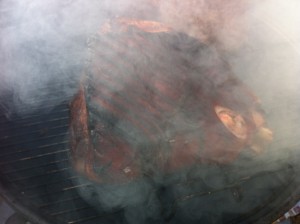 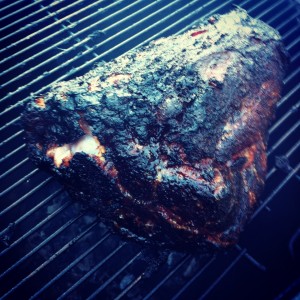